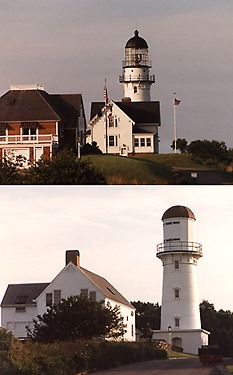 “Originally built in 1828, these two light towers, about 300 yards apart, were one of Maine’s two ‘twin lights’ (Matinicus Rock was the other). Originally constructed of rubblestone, both towers became badly eroded and were rebuilt in 1874 and constructed of cast iron. The lantern was removed from the West tower (bottom photo) in 1924 when the Lighthouse Service ruled that all twin lights must be converted to single beacons. This inactive light was sold several times to private owners and was refurbished and given a new top in 1985. The East tower (top photo) which is 67 feet tall, was automated in 1963 and is still active, although its second order Fresnel lens was removed and replaced by the current beacon in 1994. The residence and grounds of this eastern tower are now privately owned as well. In 1999 the gingerbread keeper’s house was demolished by the owner, and was replaced by a ‘replica’ with a two-car garage added. (Photos 1986, Maiden Journey)”