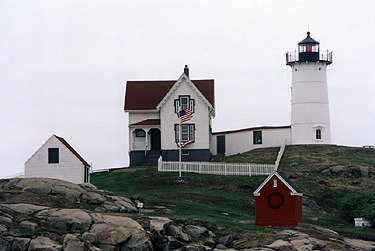 “This 41 foot tall cast-iron plated cylindrical tower was originally painted red, but has been white since 1902. It is located off the eastern point of Cape Neddick on a small, rocky island, from which it gets it’s nickname, Nubble Light. The red oil house was built in 1902 and the walkway connecting the wooden, two story, Victorian keeper’s house and the tower was added in 1911. The original fourth-order Fresnel lens was damaged and replaced by another fourth-order Fresnel lens in 1928. This lens is still in operation today. A picture of the Nubble Light was included on Voyager II, which NASA sent into space in 1977 with items aboard designed to teach extraterrestrial civilizations about our planet.”