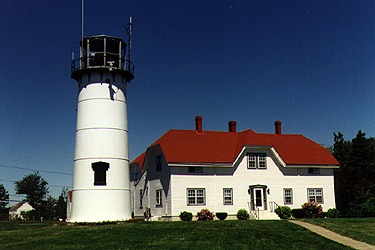 “This light is the one remaining tower of the third set of twin towers located here, near James Bluff in the center of Chatham. It is a 48-foot tall cylindrical tower constructed of curved iron plates bolted together and lined with brick. The first twin towers were 40 feet tall wooden structures built in 1808, but by 1841 they were badly deteriorated and threatened by erosion of the bluff. The second set of twin towers were 40-foot tall brick towers and were set inland from the originals. However, in 1879 the south tower fell off the bluff and in 1881 both the north tower and the keeper’s house had fallen. The current tower and its ‘twin’ were erected in 1877. In 1923 the northern tower was dismantled and shipped to Nauset Beach to replace the Three Sisters, which by that time consisted of only one badly deteriorated wooden tower.”