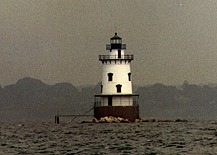 “The original granite stone tower was built on this site in 1868 to warn ships of Conimicut Point Shoal, a long sandbar which extends from Conimicut Point to the light. Located midway between Nayatt Point and Conimicut Point, it was replaced by this current 58-foot tall caisson-type cast-iron tower in 1883. This light used a kerosene lamp for illumination until 1960, when it became the last lighthouse in the United States to be converted to electricity.”