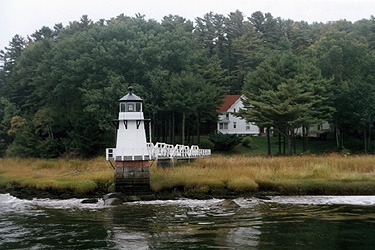 “This light, situated at a sharp double bend in the Kennebec River on the northwest end of Arrowsic Island, is one of four lights located along the river that guided ships from the Atlantic Ocean to the shipbuilding town of Bath, Maine. It is the light closest to Bath, near the upper end of Fiddler Reach. It is a white, wooden, octagonal tower built on a square concrete pier. A fifth order Fresnel lens replaced the original lantern lens in 1902. The Fresnel lens was removed around 1975 and has been relocated to the Shore Village Museum in Rockland, Maine. The current lens is a 300 mm modern optic. The tower is currently owned by the Friends of Doubling Point Light, while the grounds and keeper’s dwelling are privately owned. The other three lights along the river are: Perkins Island, Squirrel Point and Kennebec River Range Lights. (Photo 2002, Trip #40)”