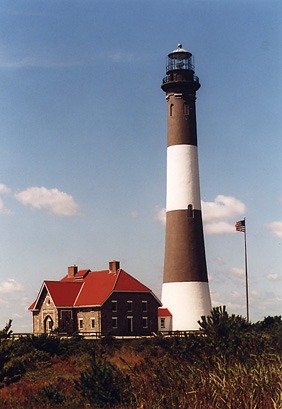 “Located on the south shore of Long Island at the western end of the Fire Island National Seashore, adjacent to Robert Moses State Park, this 168 foot tower replaced the first 74 foot tower which was taken down because it wasn’t high enough. It was originally adjacent to the inlet to Great South Bay, but the inlet has shifted approximately 6 miles westward due to migration of sand along the beach (known as littoral drift). This present tower is made of red brick encased in cement and was originally painted a creamy yellow color. It was changed to the present day-mark of black and white bands in 1891. The light tower is connected to a two story Dutch Colonial, dressed stone keeper’s house by an enclosed walkway. The light was decommissioned in 1974 and a new ‘tube optic’ was installed atop the Robert Moses State Park water tower. The lighthouse was restored by the Fire Island Lighthouse Preservation Society to its 1939 condition and was relit and reinstated as an official aid to navigation in 1986.”