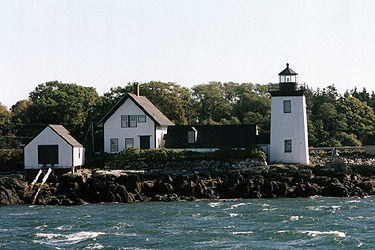 “This 39 foot tall, square, brick tower is the second light tower at the site, the first having been built in 1850. When the present tower was built the original keeper’s house became the connecting passageway to a new 1-1/2 story Cape Cod woodframe dwelling. This light is located at the western entrance to Gilkey’s Harbor, along the west shore of 10-mile-long Islesboro Island. The tower which housed a fifth-order Fresnel lens was deactivated in 1934 when an automated beacon was mounted atop a nearby skeletal tower. The town of Islesboro purchased the old tower and buildings and worked long and hard for 53 years to get the light moved back. They were finally successful and the light was reactivated in November of 1987. The former keeper’s dwelling currently houses the Sailor’s Memorial Museum.”