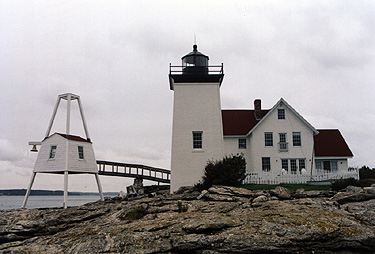 “This 39 foot tall, square, brick tower is the second light tower at the site, the first having been built in 1829. It is located on a small promontory on the west side of Southport Island, bordering the east side of the Sheepscot River mouth. The present tower originally held a fifth-order Fresnel lens that was replaced in 1979. The light was discontinued in 1933 and sold to a private individual. The light was reactivated in 1951 in response to increased boating traffic in the area. The light is still privately owned and has been completely restored to near perfect condition. The US Coast Guard maintains the beacon.”