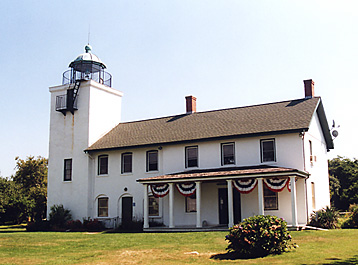 “This 58 foot tall square tower was originally built with a detached two story keeper’s dwelling. Both were constructed of New England granite, cut stone and brick. The two story annex attaching the tower to the house was added later. The light originally held a third-order Fresnel lens with a focal plane 103 feet above sea level. it sits on the north shore of the north ‘fork’ of Long Island overlooking Long Island Sound. Deactivated in 1933, it was restored by the Southold Historical Society and Southold Park District and reactivated in 1990 and is still active today. The Historical Society operates a nautical museum in the restored keeper’s house.”