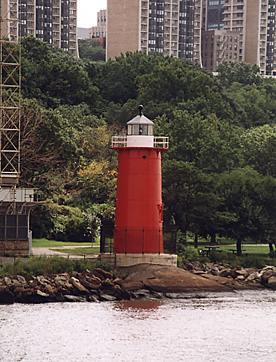 “This light sits beneath the George Washington Bridge and is the southernmost lighthouse on the Hudson River and the only lighthouse on the island of Manhattan. The 40 foot tall conical, iron tower was originally constructed in 1880 on Sandy Hook, New Jersey. It was dismantled in 1917 and reconstructed in 1921 at its present location, replacing two 10-candlepower lanterns atop a red pole which had been erected in 1889. The George Washington Bridge was constructed over it and opened in 1931, making the lighthouse obsolete. Removal of ‘Little Red’ was proposed in 1951, but an outpouring of public support, prompted by the children’s book ‘The Little Red Lighthouse and the Great Gray Bridge’ by H. Swift and L. Ward, helped save it. Surrounded by Fort Washington Park, it is no longer active, but remains an important symbol of the area’s heritage.”