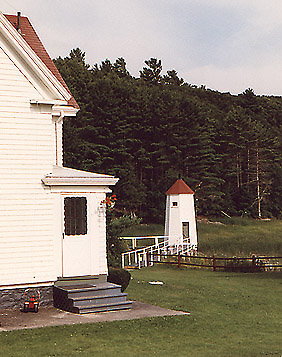 “Formerly called the Doubling Point Range Light, this octagonal wooden structure sits 235 yards from an identically shaped rear light along the Kennebec River on Arrowsic Island. It is one of four lights located along the river that guided ships from the Atlantic Ocean to the shipbuilding town of Bath, Maine. (The others are Doubling Point Light , Perkins Island Light, and Squirrel Point Light.) Originally equipped with a fifth-order Fresnel lens, it currently houses a 250 mm modern lens which was installed in 1979 when the light was automated. A photo showing both Kennebec River Range Lights, as well as photos of Perkins Island and Squirrel Point lights can be seen by going to the Fortieth Expedition.”