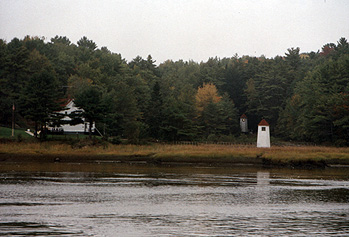 “Formerly called the Doubling Point Range Lights (prior to 1982) these identically shaped towers sit on Arrowsic Island along the east side of the river, marking a range line for mariners approaching Fiddler’s Reach from the south. The shingled octagonal towers are set 235 yards apart, in a north-south orientation, and have a connecting wooden walkway. The front tower is 21 feet tall with the light 18 feet above the water. The rear tower is 13 feet tall with it’s light 33 feet above the river. Each tower originally held a fifth-order Fresnel lens but both were removed in 1979. This station is one of four lights located along the Kennebec River guiding vessels from the Atlantic Ocean to the shipbuilding town of Bath, Maine. The other three are: Doubling Point , Perkins Island and Squirrel Point . (Photo 2002, Trip #40)”