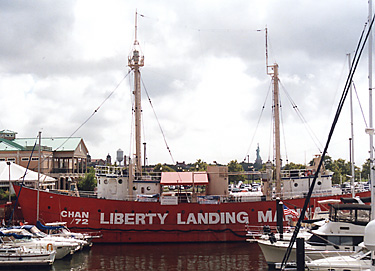 “The Lightship Winter Quarter was commissioned in 1923 as Light Vessel No. 107 and later renumbered WAL 529 by the Coast Guard. It was built by the Bath Iron Works in Bath, Maine. Her first position was at Cape Lookout Shoals off the coast of North Carolina from 1924 to 1933. Then her primary assignment was Winter Quarter Shoal off Virginia from 1934 to 1960, except when she was an examination vessel from 1942-1945 during WWII. From 1960 to 1965 she was known as Delaware located near the entrance to the Delaware Bay. Her last official position was as Relief Third District based at Cape May, NJ. She was retired from lightship duty in 1968 and transferred to Hampton, VA as a museum. She was still in Hampton as of 1980, but was reported in 1984 to be at a shipbreakers yard in Bordentown, NJ and remained there as of 1988. Today, however, she is located at Liberty Landing Marina in Liberty State Park, NJ and is called the Lightship Barge and Grill.

Winter Quarter is 132 feet 4 inches long with a beam of 30 feet, a draft of 14 feet 7 inches and a displacement of 775 tons (full). She has a fuel capacity of 54,550 gallons and was originally propelled by a 400 HP steam engine having a top speed of 9 knots. This engine was replaced with a GM 400 HP diesel with a top speed of 7.5 knots in the 1940’s. She originally had a lantern gallery at both mastheads.”