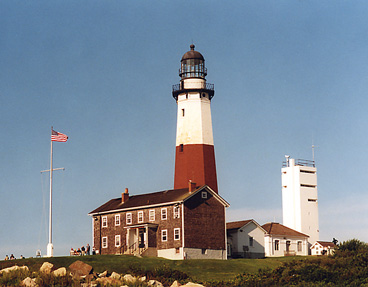 “Originally 78 feet tall and constucted of sandstone blocks from Connecticut, the height of this octagonal pyramidal tower was increased to 110 feet in 1860. The present two story Colonial, brick keeper’s house was also constructed in 1860. It housed a head keeper and his family and two assistant keepers. Today it houses a museum. Located at the easternmost tip of Long Island, this is the oldest lighthouse in New York State and the fourth oldest active lighthouse in the United States. The tall, rectangular white tower behind the lighthouse is a Fire Control Station built during World War II as part of the extensive Eastern Coastal Defense Shield.”