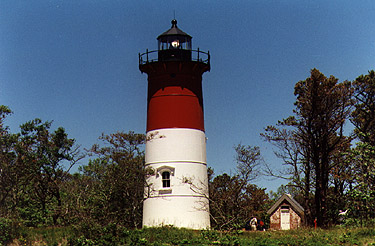 “This 48-foot tall conical cast-iron tower was originally built in 1877 as one of the twin towers at Chatham. It was dismantled and moved to Nauset in 1923 to replace the last of the Three Sisters. It stands above the Nauset cliffs guarding Cape Cod’s Atlantic coast. Originally placed some 200 feet from the cliff’s edge, by 1996 it was only 37 feet from the edge. In November of 1996 it was moved another 200 feet inland, where it stands today near the previously relocated oil house. The light was relighted on May 10, 1997. Plans are being made to relocate the keeper’s dwelling as well.”