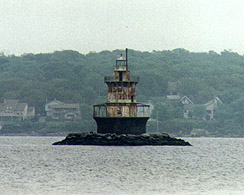 “This 54-foot tall cylindrical cast-iron caisson-supported tower sits near the Jamestown Bridge at the western entrance to Narragansett Bay. It became ineffective when the bridge was built in 1940 and was discontinued the next year. Abandoned a few years later, it has fallen to the elements and is badly deteriorated. Friends of Plum Beach Lighthouse hope to begin restoration soon. [Update: The exterior of the tower has been restored, and a new light placed in the lantern room as of December, 2003.]”