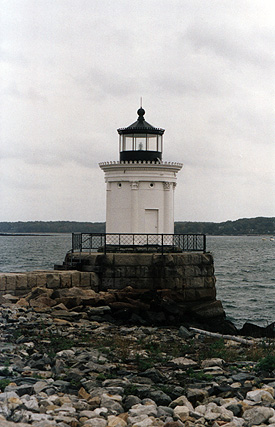 “This 13 foot tall cylindrical, cast-iron plated tower resembles a 4th century (B.C.) Greek monument in it’s ornamental design. It originally sat at the end of a breakwater that extended some 2,700 feet out into the water on the south side of the entrance to Portland Harbor. It held a sixth-order Fresnel lens which was removed in 1939. A wooden keeper’s house was built adjacent to the tower in 1889 but was removed in 1934 when the light was automated. Locally known as the ‘Bug Light’, the tower now stands at the end of a short jetty and is part of a recreational park owned by the city of South Portland.”