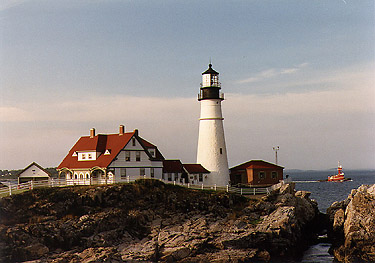 “This 80 foot tall, conical rubblestone tower was the first lighthouse built in Maine. It was the thirteenth lighthouse built on the Atlantic Coast. It is situated at the south entrance to Portland Harbor, adjacent to Fort Williams State Park. Considered by many to be one of the most beautiful and picturesque lighthouse in Maine, it is one of the most photographed lights in the United States. The light has undergone numberous changes over the years, with the lamp/lens being changed eight times and the height of the tower modified three times. It has housed both a second order and a fourth order Fresnel lens. The station is currently owned by the town of Cape Elizabeth and the Museum at Portland Head Light has been located in the former keeper’s house since 1992. (Photo 1986, Maiden Journey)”