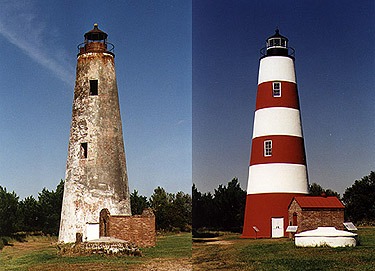 “This 90-foot tall brick tower was built by Winslow Lewis on land provided the Federal government by Thomas Spalding. It was originally built as a harbor light, guiding vessels into Doboy Sound north of St. Simons Island on their way to the increasingly busy port of Darien. It received a fourth-order Fresnel lens in 1854. Confederates damaged the tower during the Civil War, but it was repaired by the Lighthouse Board in 1868. It was undermined by the hurricane tidal wave of 1898 and was abandoned by the Lighthouse Service soon after. The Service erected a 100-foot steel pyramidal tower in 1905 that operated until 1933 when lighthouse operations were suspended for good. The skeletal tower no longer exists at the site and the brick tower had fallen into disrepair until it was renovated in 1998. The photo shown on the left is how it appeared in 1996 (27th trip) and the photo on the right is how it now appears after the renovation (35th trip). It is part of the Sapelo Island National Estuarian Sanctuary.”