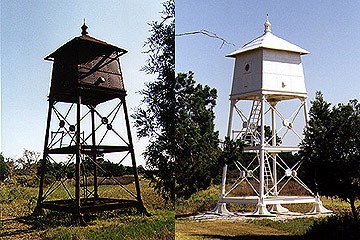 “This 25-foot tall cast-iron range light tower sits some 660 feet to the east of the main Sapelo Island Light. During World War II, the tower served as a Coast Guard observation post against the German submarine threat. It was repainted in 1998 when the main light was renovated. The photo on the left is how it appeared in 1996 (27th trip) and the photo on the right is how it now appears (35th trip).”