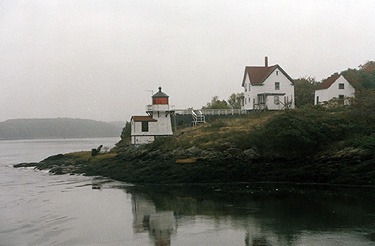 “This 25 foot tall octagonal, wood tower with attached signal building sits on the southwest point of Arrowsic Island along the eastern side of the Kennebec River. The 1-1/2 story wood framed Victorian style keeper’s house was built the same year as the tower. The tower originally held a fifth-order Fresnel lens, but it was removed in 1980 and replaced with a 250 mm modern plastic lens. The Fresnel lens is on display in the museum at Portland Head Light. Squirrel Point is the second of four Kennebec River lights encountered upon entering the river from the Atlantic Ocean enroute to the shipbuilding town of Bath, Maine. The other three are: Perkins Island , Kennebec River Range Lights and Doubling Point .”