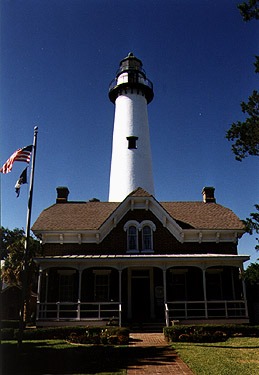 “This light sits at the southern tip of St. Simons Island at 101 12th Street. Its tower is 104 feet tall and has a 129 step cast-iron spiral staircase which can be climbed as part of the lighthouse tour. This light replaced the original 1810 light which was destroyed during the Civil War by Confederate troops as they were forced to evacuate the island by invading Northern forces. The connected keeper’s dwelling (also built in 1872) is a unique Victorian design. The tower and keeper’s dwelling were built by Charles Cluskey, one of Georgia’s most noted architects.”