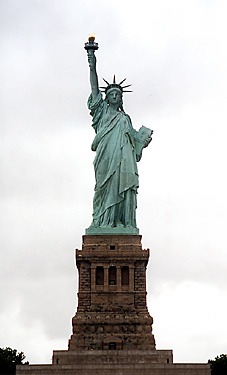 “Designed by French sculptor Frederic-Auguste Bartholdi, this light sits on Liberty Island (formerly Bedloe’s Island, until 1956) welcoming ships into New York Harbor and the ‘new world’. Originally assembled in France (completed in 1884) the Statue of Liberty was dismantled and reassembled in New York in 1886. The Statue itself is 151 feet from its base to the torch. The pedestal she stands on is 89 feet tall and the foundation is 65 feet high, giving the monument an overall height of 305 feet. Upon its completion, it was placed under the responsibility of the U.S. Lighthouse Board and operated as an aid to navigation. However, the lighting in the torch was never bright enough to be much help to vessels entering the harbor and Liberty Lighthouse was closed in 1902. It was declared to be a national monument on October 15, 1924, and remains today as a monumental symbol of liberty throughout the world.”