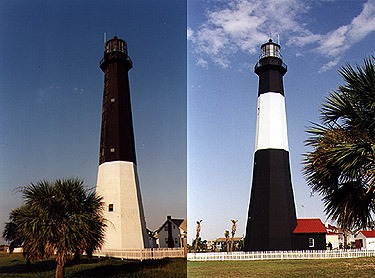 This 145-foot-tall lighthouse sits on Tybee Island and marks the mouth of the Savannah River. It is the oldest active light station on the southeast coast. It has been leased to the Tybee Island Historical Society and is opened daily to the public. A museum has been established in the 1881 keeper’s dwelling. The tower was repainted in 1999 to reflect the daymark scheme as it appeared from 1916 to 1964. The photo on the left is how it appeared in 1993 (17th trip) and the photo on the right is how it now appears in 1999 (35th trip).