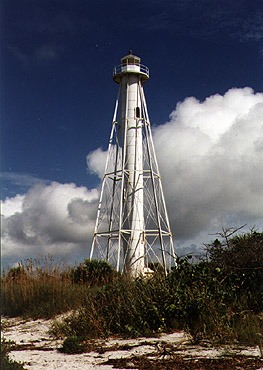 “This hexagonal, skeletal tower stands approximately one mile from the southern tip of Gasparilla Island. One account has it built in 1890, the same year as the Port Boca Grande light, in a location which ranged with that light. It was later moved on shore (having ended up in the Gulf due to shifting shoreline) on range with some outer buoys. Another account says it was completed in 1932 and formed a range with a small offshore light. Perhaps it was built in 1890 and then moved in 1932?”