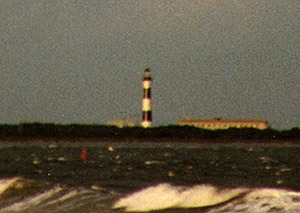 “The first lighthouse at this site was a 65-foot tower built in 1848, but it was deemed to be inadequate. The present 145-foot iron-plated tower was completed in 1868 and five years later it was painted with the alternate black and white bands. In the early to mid 1880’s sea erosion threatened the tower, so in 1893 it was dismantled and moved 1.25 miles inland. The relocated beacon was relighted in 1894. Today it is automated and stands on the grounds of the Kennedy Space Center.”