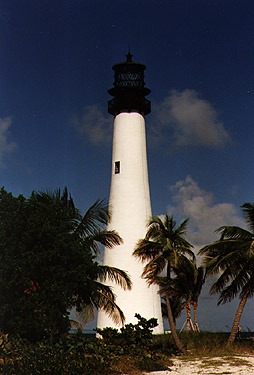 “This 95-foot tall tower replaced the original 65-foot structure which had been built in 1825 but destroyed in 1836 during the Seminole War. The light was extinguished in 1878 when the Fowey Rocks Light was established. In 1978, 100 years later, it was relighted by the Coast Guard. In 1988, Dade Heritage Trust began a movement to completely restore the structure to its authentic 1855 condition, including the white-washed masonry exterior. Today it stand as the centerpiece of the Bill Baggs Cape Florida State Recreation Area.”