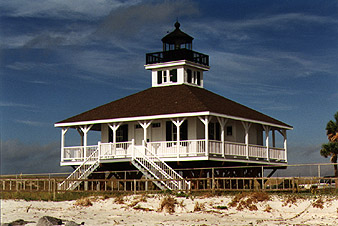 This structure sits at the south end of Gasparilla Island and was originally known as the Gasparilla Island Lighthouse. It is a square dwelling with a pyramidal roof and a square light tower rising through its center. The station was decommissioned in 1967 but a local conservation group restored the structure and with permission of the Coast Guard it was relighted in 1986. It is planned that the lighthouse will one day house a maritime museum.