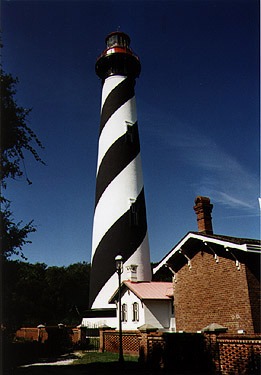 This 165-foot tower is located on St. Augustine’s Anastasia Island. It rests on an octagonal foundation and has the same one-story entry building with gable hood seen at North Carolina’s Bodie Island and Currituck Beach lighthouses. The two-story brick duplex keeper’s dwelling was built in 1875 atop a coquina (tabby) foundation. These lighthouse structures are the oldest brick structures in St. Augustine. This current lighthouse replaced the original wood and tabby towers which had occupied the site since 1586. In 1824 the U.S. Government took possession of the 30-foot tall tower standing there at the time (later raised to 52 feet) and it became Florida’s first official lighthouse.