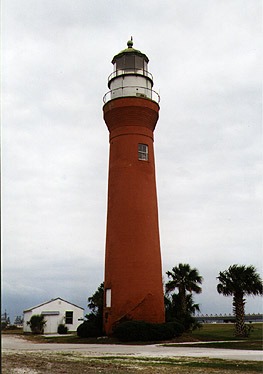 “This light is located on the grounds of the Mayport Naval Station at the mouth of the St. Johns River. Originally 66 feet tall, it was raised to its present height of 81 feet in 1887. It was replaced by a lightship positioned 7 miles out in the ocean in 1929. In 1969, the Coast Guard turned the lighthouse over to the Navy as part of the Naval Station. When the surrounding land had to be raised and leveled off for the laying of the station’s runways, the base of the lighthouse became buried some 20 feet below the ground. The outline of the top portion of the previously attached keeper’s house can be seen at the bottom of the tower.”