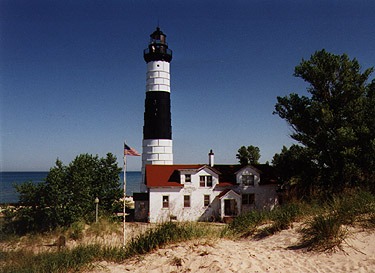 “The early years of this lighthouse were characterized by constant battles with beach erosion and brickwork deterioration, a problem not solved until the early 1900s when the tower and watchroom were encased in steel plates and the brickwork filled in with concrete. The lighthouse has been beautifully restored by the Big Sable Point Lighthouse Keepers Association and is open to the public from May 1 through the end of October. (Photo 1996, Trip #26)”