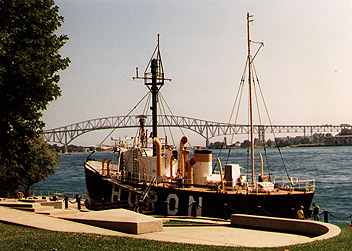 “The Lightship Huron was commissioned in 1921 as Light Vessel No. 103, and was built by the Charles L. Seabury Company of Morris Heights, New York, at a cost of $147,428. It first went into service as a relief vessel used to replace other lightships on duty in northern Lake Michigan. From 1923 to 1927 and in 1930 it served as the Gray’s Reef Light Vessel, and in 1934 served at North Manitou Shoal. In 1935 it was permanently assigned to the Corsica Shoals as the Huron Station Light Vessel, six miles north of Port Huron, where it remained on duty until 1970. From 1941 to 1970 the Huron was the only American lightship on the Great Lakes. After being decommissioned in 1971, the Coast Guard gave the Huron to the City of Port Huron, where it now sits on shore on display to visitors.