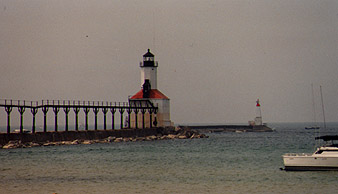 “The East Pier light was constructed to take the place of the older Michigan City Light onsshore. Legend has it that during the 1920s Al Capone would frequently drive by in his speedboat on his way to his house in Long Beach, going by water to avoid being ambushed by rivals.

The Breakwater Light was constructed at the same time that the breakwater itself was rebuilt after being destroyed in a storm the previous winter.”