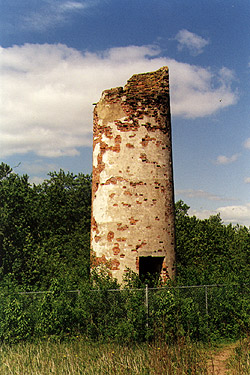 “This long forgotten red brick structure stands at the end of Minnesota Point which stretches out into Lake Superior from Duluth. The walk out to the ruins is about one and a half miles, the last half mile of which is fairly tough, up and down sandy hills. The empty, crumbling shell is all that remains of the original tower which was built near the water’s edge, but now stands about two blocks from shore due to the years of shifting sands. (Photo 1998, Trip #31)”