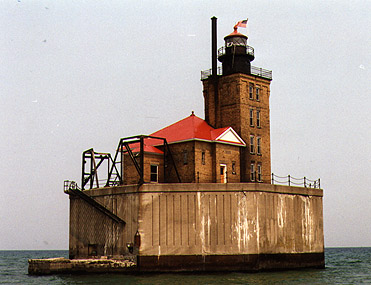 “The Port Austin Reef extends into Lake Huron off the tip of Michigan’s ‘thumb’. The dangers of this reef are made obvious by the several shipwrecks that sit at the bottom of the reef in the area near the lighthouse, which sits about two miles from the mainland. The light was modified to this present structure in 1899. It was abandoned by the Coast Guard in 1953 and major deterioration had begun as early as 1958. Restoration of the light began in 1984 by the Port Austin Reef Light Association and is still underway today. (Photo 1996, Trip #24)”