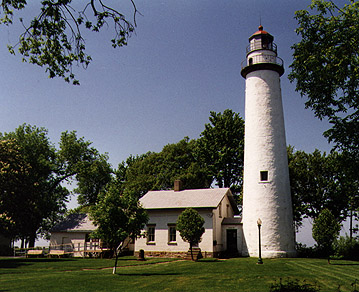 “The lighthouse at Pointe Aux Barques (‘point of the little boats’) was originally constructed in 1848 to mark the turning point from Lake Huron into Saginaw Bay, and to warn mariners of the shallow regions near the coast. After suffering severe structural damage, it was rebuilt in 1857. The Coast Guard sold the land and the keeper’s house to Huron County in 1958, and the light tower and dwelling became part of the Huron City Museum, a seven-acre parcell of land maintained as a park which contains several other authentic restorations of period buildings. The lighthouse site is now home to two museums, the historical memories of the light and the maritime shipwreck preserve. The light still operates, but is now automated. (Photo 1996, Trip #24)”