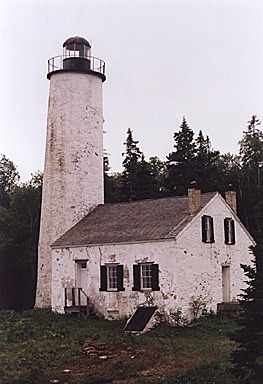 “This light marked the southeast side of Lake Superior’s Isle Royale and now sits lensless at the west end of Rock harbor. The light was inactive from 1859 until 1874 when mining operations in the area had ceased. The mining resumed in 1874 and the light was relit. It was permanently deactivated in 1879. The 50 foot tall conical stone tower is attached to a 1.5 story rubble stone keepers quarters which now houses a museum. Both the tower and attached dwelling have been restored by the National Park Service, which owns and operates the building. The tower was originally equipped with a fourth order Fresnel lens.”