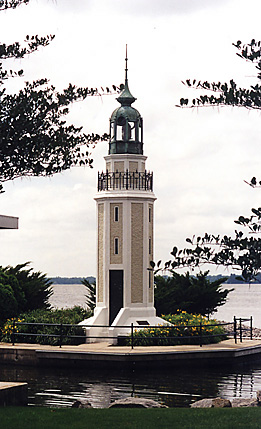 “Built by William Bray with his own funds as a private aid to navigation, this 42 foot (to the top of the spire) tall lighthouse is located on Lake Winnebago’s western shore where the Fox River empties into the lake. It is named after the architect who designed the tower. The lighthouse and the point where it sits have been named over the years for the owners of the land, including Bray, Thompson, and Buckstaff. In 1917, Thompson’s Point Lighthouse (as it was then called) was the only government-licensed inland light and Mrs. Thompson was appointed as lighthouse keeper. During the late 1950’s the light was no longer lit, but it was restored and relit in 1986. It continues to show a fixed red light today.”