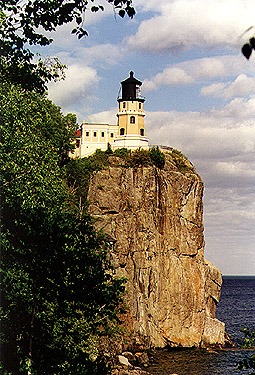 “This 54 foot tower sits atop a 130 foot cliff along Lake Superior’s shore, 20 miles north of Two Harbors. Its location makes it one of the most picturesque on the Great Lakes. The station, now the centerpiece of a 100 acre state park, includes the tower, a fog signal building, two barns, an oil storage structure and three keeper’s dwellings. It has been restored by the Minnesota Historical Society to its pre-1924 appearance. Guided tours are available during the summer. Each year on November 10th, the anniversary of the sinking of the Edmund Fitzgerald in 1975, the light in the tower is ceremonially lit. This light was the featured Lake Superior lighthouse on the Great Lakes Lighthouse series of U.S. Postage stamps issued in 1995. (Photo 1998, Trip #31)”