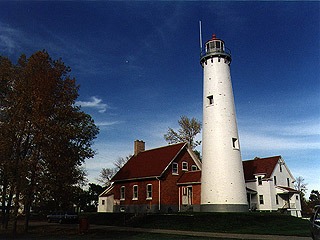 “Originally built in 1852, the Tawas Point Light had to be moved in 1876 because Tawas Point (also known as Ottawa Point) on which it sits had moved more than a mile due to shifting sands! Tawas point sits at the end of a peninsula which separates Tawas Bay from Lake Huron. The light is still in operation and is under the care of the US Coast Guard. (Photo 1997)”