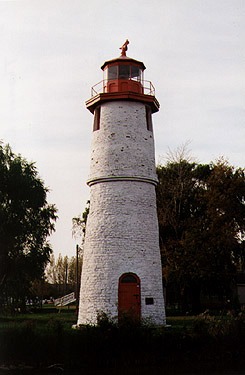 “Located at Lighthouse Cove where the Thames River empties into Lake St. Clair, the original 46 foot tall, limestone tower was built from 1814-1816 to replace a wooden tower that was destroyed during the War of 1812. In 1867 the tower was raised to its present height of 53 feet with the addition being built of brick and mortar. The ring marking the beginning of the addition is clearly visible in the tower. By 1972 the tower had taken on a considerable list. It was acquired by the Lower Thames Valley Conservation Authority, which undertook to restore and straighten the tower. It is still an active light today, and has been designated a heritage site.”