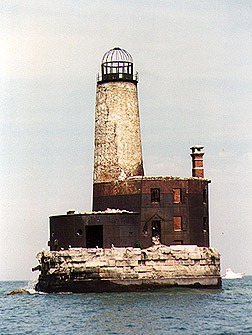 “Even though it was once used for target practice during World War II, this decaying structure still stands, barely, at the place where it once warned ships of the dangerous formation near the Straits of Mackinac where the water depth can get to less than twelve feet. (Photo 1988, Trip #4)”