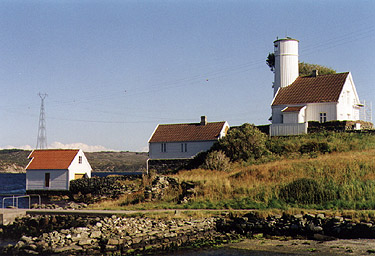 The first lighthouse built here at Karmsundet (the strait separating Karmøy from the mainland) in 1700 was only the third lighthouse built along the Norwegian coast. The present light was built in 1858 but was only in use until 1902 when it was replaced by two modern lanterns. While in use it also served as a customs house where taxes were collected from passing ships. Today it sits on the grounds of the Hydro Aluminum Plant and has been refurbished with turn of the century dï¿½cor. It is used as a conference center and for entertaining guests.