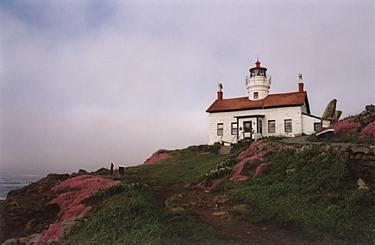 “Originally called the Crescent City Lighthouse, this light sits on a small hill located about 200 yards off Battery Point along California’s north coast, just south of the Oregon state line. During high tide, the hill is an island, but at low tide it is connected to the point by an isthmus. The 45 foot high brick tower rises through the center of the building. Decommissioned in 1965, it remained dark until 1982, when it was reestablished as a private aid to navigation known as Battery Point Lighthouse. It is now owned by Del Norte County and operates as a museum.”