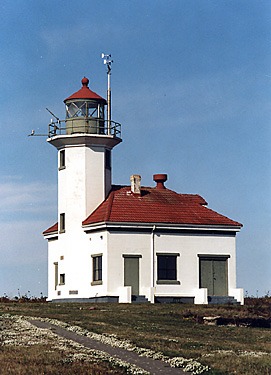 “This 44 foot tall octagonal reinforced concrete tower is attached to the concrete fog signal building which was also built in 1934. This is the third lighthouse on the site, the first two having been built in 1866 and 1908. The original fourth-order Fresnel lens was moved from tower to tower and operated in this current one until it was replaced in 1998. The lens had a focal plane of 100 feet above sea level. The light is situated on an islet just off Gregory Point which is connected to the mainland by a long narrow footbridge. The first two lighthouses were abandoned because of their close proximity to the eroding cliffs of the island. The island continues to grow smaller and it is probably only a matter of time until this lighthouse suffers the same fate as the first two.”