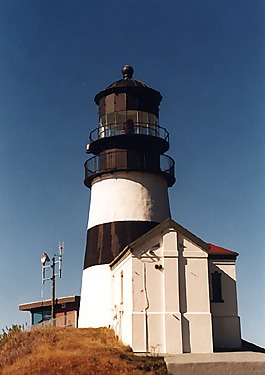 “Located on a headland on the north side of the Columbia River where it empties into the Pacific Ocean, this 53 foot tall conical, dressed stone tower and attached oil house has a focal plane of 220 feet above sea level. It originally housed a first-order Fresnel lens. That lens was moved to the newly established North Head Light in 1898, and Cape Disappointment received a fourth-order lens and became a harbor light. This light is 1 of 3 to survive among 8 original lighthouses constructed on the west coast which is still active today. Cape Disappointment (the headland) was named by fur trader John Meares, who mistook it for another landfall and, realizing his error, sailed away in disappointment.”