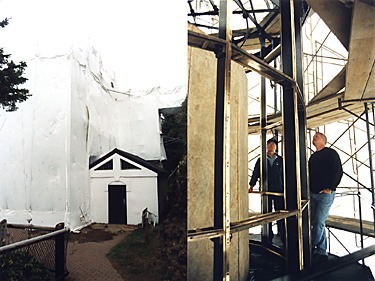 “Cape Meares Light is a 38 foot tall octagonal brick tower sheathed in sheet iron and has a small attached workroom which was added to the structure in 1895. It had a focal plane 217 feet above sea level. Located at the southern exposure of Tillamook Bay, it resides in Cape Meares State Park. A modern structure was added on site in 1963, but the old tower maintained its original first-order Fresnel lens. This picturesque site has become a popular tourist attraction. (Unfortunately for us, the light tower was under restoration at the time of our visit. It was completely enclosed in white ‘bubble wrap’, as can be seen in the photo on the left. The photo on the right shows the restoration in progress being viewed by Bob Reed, at left, of the Friends of Cape Meares Lighthouse and Wildlife Refuge, Inc, and Dave Snyder, at right, of the U.S. Lighthouse Society. Restoration began on March 24, 2003 and is nearing completion as of November 1, 2003.)”