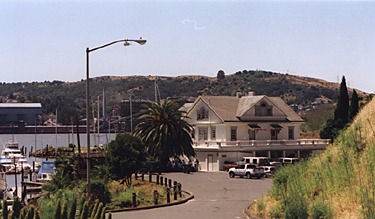 “This two and one-half story, 28 room, wood frame keepers’ dwelling is what is left of the Carquinez Strait lighthouse. Originally a three story, square, wooden tower was attached near one corner of the building. It sat at the northwestern end of the strait, just east of Mare Island. It was deactivated in 1951 and purchased by Robert Hubert of San Francisco in 1955. In 1957, Mr Hubert moved the building (without the tower) by barge up the Strait to its present location where it is now the offices of the Glen Cove Marina.”