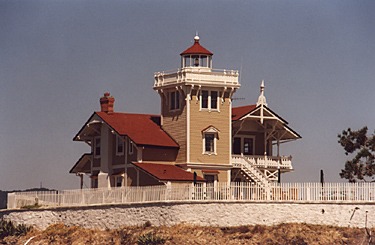 “This Victorian lighthouse with its 48 foot attached tower covers a small island about one-half mile off Point San Pablo at the southern entrance to San Pablo Strait. It is one of only two remaining Victorian lighthouses of the four built in California during this same time (Point Fermin is the other). The last civilian lighthouse keeper left the island in 1945 and it was manned by Coast Guard personnel until it was automated in 1969. In 1970 it was placed on the National Register of Historic Sites. Today, it is operated as a Bed & Breakfast Inn by East Brother Light Station, Inc.”