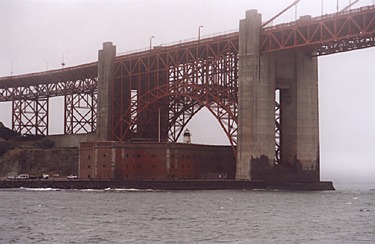 “This 27 foot high iron tower stands atop the fort at its northwest bastion at the southern base of the Golden Gate Bridge. It is the third tower at the point, the first two being built in 1854 and 1855 respectively. The first lighthouse was identical to the original light on Alcatraz island (a 28 by 30 foot Cape Cod style structure) but was torn down without ever being lit to make room for the building of the fort. The second light (a 36 foot wooden tower) was positioned between the fort and its seawall, but had to be torn down when the seawall had to be rebuilt. This third lighthouse was discontinued during construction of the Golden Gate Bridge because the rising towers of the bridge obscured its light. It is currently owned by the National Parks Service.”